MADI advocates the basic idea of panta rhei. Through simple colours, elements, and poligonal planal structures it attempts to grasp the movement that epitomises life, while it incorporates the frame and the environment into the painting, and includes empty spaces and deconstructed forms in sculpture. It does not stop at the classic rectangular basis, at static plasticism, at inclusive masses. It banishes the rigid differentiation between inside and outside, it denies all restriction and limitation. A MADI piece “swims in its environment as a fish swims in water” (Carmelo Arden Quin). According to MADI, every moving object that is able to accommodate people, such as a ship or an airplane, can be considered a MADI building. 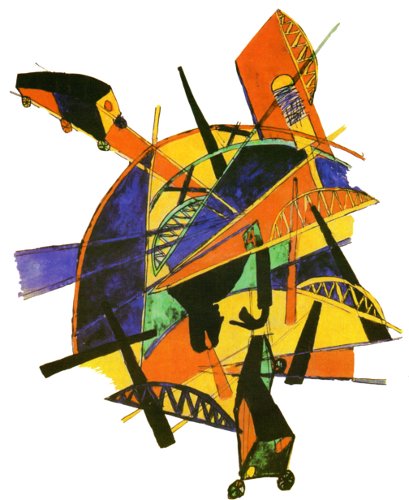 In Hungary, contemporary constructive geometric trends have grown from thick grassroots. Let us consider besides Moholy-Nagy and Péri the art of Schöffer or Vasarely, and, above all, Kassák, who returned from the Viennese emigration in the second half of the 20s, to languish and work in Hungary: he founded the so-called bildarchitektur – closely related to the aesthetics of MADI – well back in 1921. Although the war years, and later the social realism of Hungary suppressed all geometric trends, the second generation of avant-garde artists active in the sixties (Imre Bak, János Fajó, Ilona Keseru, Tibor Csiky, Tamás Hencze) went back consciously to this heritage, and took it as a strong foundation: in the late sixties Bak created shaped canvases, Fajó painted free-formed images and made metal plate sculptures with negative spaces, Keseru prepared canvas objects while she also used plaster, whereas Haraszty created playful mobile sculptures. In the eighties Attila Joláthy, Tamás Hencze and Dóra Maurer also brought forth free-formed works.

Art-historical facts reveal that Hungarian geometric constructive artists not only assisted at the birth of MADI, but they incessantly created latent MADI pieces of art, following in the tracks of their predecessors. That is why, when János Saxon-Szász and myself met the “MADIstas” and personally Arden Quin in 1991 in Paris, we decided to acquaint the contemporary Hungarian constructive and geometrical artists with InterMADI. In the course of studio visits, it was not difficult to find shaped paintings that scatter the frames, mobile sculptures, geometric pieces made of plexiglass, operating with light and empty spaces.

From the collection going back as far as the sixties, we organised two initial MADI exhibitions in 1993-94 in Gyôr and the Kassák Museum in Budapest, under the title and theme Shaped Canvas. In these displays almost twenty contemporary artists took part. The subject matter raised some misunderstanding in domestic professional and critical circles since they attributed the first occurrence of such paintings to the North American Stella, and the shaped canvas tendency. This, in itself, would not have been a problem, but at the same time they questioned the precedence of MADI. Facts, however, prove that MADI manifested itself in 1946, and Stella´s first shaped canvases date from at least a decade later. Otherwise, MADI relates to most branches of art, it cannot be reduced to the issue of shaped canvases, not to mention the fact that art is no sport, no race against time.
The event at the Kassák Museum found a deserved international reception. The Hungarian artists were invited to France in 1994, to the foundation ceremony of the first International MADI Museum, in which twelve of them participated through the donation of their works. One of the most important events in the history of MADI in Hungary has been the International MADI Festival organised in Gyôr in June 1995, on the 100th anniversary of László Moholy-Nagy´s birth. In accordance with the MADI mentality, apart from the art exhibition, the premiére of Attila Reményi´s MADI composition took place (performed by the Gyôr Percussion Group); there was collective MADI-poetry, kites were prepared, fireworks, post in the bottle, a documentary display, and a MADI conference marked the series. Among several foreign artists, even Carmelo Arden Quin came to the large-scale event.

Artists from various countries dedicated some of their pieces to an international MADI museum to be set up in Hungary.
From the works of the “Mobile MADI Museum”, which has, as yet, no firm place, introductory exhibitions are organised in entire Central Europe.

In April 1997 the visitors could become acquainted with the works of the Hungarian MADI Group (at the Víziváros Gallery) and foreign MADI artists (at the French Institute) in a double exhibition. Art historian Dr László Beke, who opened the exhibitions, remarked: “A movement in geometric art has been born which in almost all relevant factors refutes the former developments of geometric art: it does not want to be rigorous or dogmatic, but joyful, ingenious and playful. And these artists, whether foreign or Hungarian, are free enough to dismiss all those aspects of earlier art that would tie them”.
With these precedents, the third generation of avant-garde artists – the former disciples of Csiky, Dargai, Fajó and Konok – came forth in 1993 as the MADI Group of the independent Fény-Árnyék (Light-Shadow) Art Association. Possessing the inheritance of the geometric constructive attitude, they consciously accepted “the fluxus of free geometry”. MADI has become a movement in Hungary, too. 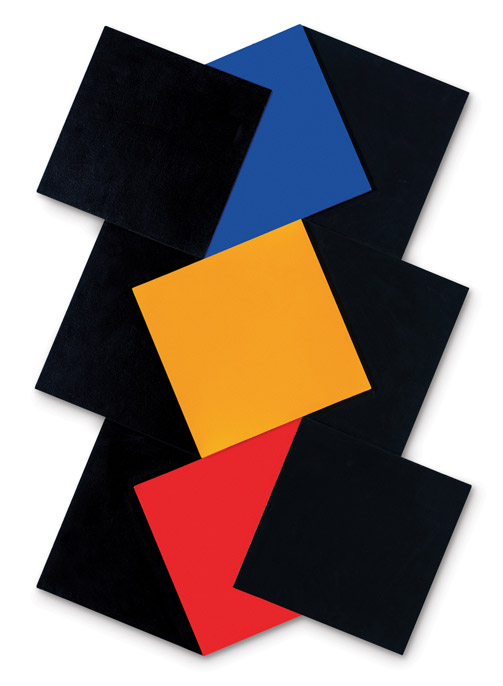