There are few artistic movements whose beginning can be linked to a well-defined date. The moment of the birth of Latin American MADI, for instance, can hardly be determined, even though there are some events to which it can be connected, like – among other things – the first MADI Manifesto (1946). The European history of the movement, however, is relatively easy to date; barely three expressions – a year number and two names – are needed: 1948, Paris and Carmelo Arden Quin.

The Paris of the late forties scarcely resembled the busy cultural centre of the beginning of the twentieth century. World War II inflicted horrible damage to the city, and the quick German occupation in France left the self-esteem of the entire country – and, indeed, of the capital – in tatters. After 1945, the primary aim of Paris was to restore the pre-war conditions, that is, to reestablish and reaffirm itself as the centre of European art.

In this period, a series of modern art galleries were opened in Paris. The Denise René Gallery supporting geometric abstract art came into existence in 1945, and a year later Frédo Sid’s founded the Salon des Réalités Nouvelles, which was soon to gain enormous importance. Many relate the Salon to the Abstraction-Création Group of van Doesburg. The first European exhibition of MADI pieces also took place at the young Salon.

A prerequisite of MADI is freedom. As a movement, it has not once in its entire history submitted to any attempts at its institutionalisation, and from the very beginning it has in principle denied all competition between various MADI groups. In the late forties, however, unfortunately – and, luckily, uncharacteristically – some tension occurred in the Buenos Aires MADI group. Arden Quin, who had always thought of Paris as the only real centre of art, and hence had always wished to work in the French capital, moved to Europe soon after these problems surfaced, and in 1948 he introduced his trend at the display of the Salon des Réalités Nouvelles. This event can be considered the European introduction of MADI. After Arden Quin and his MADI Group received from several sources favourable criticism for their Salon appearance, in 1950 they succeeded in attaining their own studio. This was located in Rue Froidevaux, in the studio of Marcelle Saint-Omer, who had also joined the movement. The Paris MADI Group of the fifties provides a brilliant picture of the real substance of the movement. The members of the group regularly showed to each other their pieces (whether they were ready or in the process of creation), which encouraged the continuous discussion of various new ideas, methods and results. The studio in Rue Froidevaux, on the other hand, housed exhibitions and lectures as well, and even film showings and public debates and discussions took place there.

It is significant that not even in this period when commercial interests started to influence artistic life as a consequence of the inauguration of new galleries did MADI attempt to conquer different artistic platforms. On the contrary, it focused on research and inner development. Yet they did not have to wait long for their first success.

After two years of intense activity, in 1952 the Denise René Gallery took notice of MADI, and organised the first European group exhibition which consisted of the works of MADI artists as well as of other followers of geometric abstraction. Just to mention some of the participants: Arden Quin, Nuez, Jean Arp and Sophie Taeubert, Sonia and Robert Delaunay, Le Corbusier, Vasarely. The title of this display was “Diagonal”. A year later, the MADI Group occupied a separate room at the exhibition of the Salon des Réalités Nouvelles.

The heart of the movement in France is Carmelo Arden Quin. No wonder that the style of the Paris group has since its birth been dominated by his art, which has up to the present day advocated a new pictorial freedom. Arden Quin’s works have always been famous for their simplicity and clarity, as well as for the outstanding ingenuity and creativity inherent in them. His innovations realised in the field of abstract art – the bursting of the frame, poligonality, the use of convex and concave surfaces as a means for surmounting the plane, his so-called coplanar structures – need no introduction. They have played a dominant role in the second half of the twentieth century in the advance of abstract geometric art. The other perspicuous feature of Arden Quin’s oeuvre is the maintenance of the associative nature of MADI. The group which initially worked in the studio in Rue Froidevaux, has by now grown into a huge association covering entire Europe, with followers in dozens of countries. In order to coordinate this group, Arden Quin founded the International MADI Association 1992. 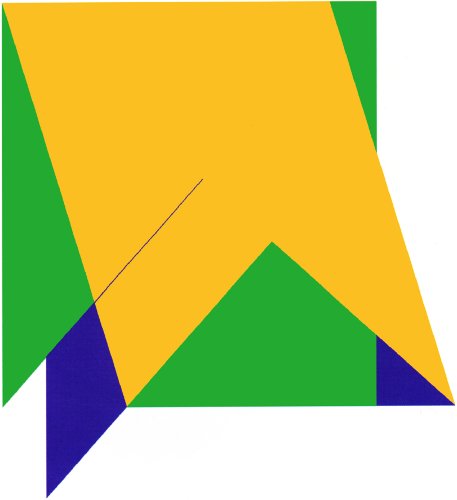 As to the name of the movement, countless concepts have circulated. There are almost as many explanations as MADI artists. If, however, we are interested in the meaning of the word rather than its history, that acronym provides the richest information which became generally known in connection with European MADI and whose structure even this periodical follows: Movement, Abstract Art, Dimension, Invention. “Abstract art” refers to the genre of creation, “dimension” expresses the spatial playfulness of the pieces as well as their relation to their environment, “movement” (whether real or virtual) reflects the dynamic character of MADI, whereas “invention” hints at the mode of creation. These considerations are true not only to the French MADI movement but also to that of entire Europe. On the basis of these facts it is no exaggeration to say that MADI, starting from Latin America, arrived in Europe via France, more specifically through Paris, and it spread all over the continent due to Arden Quin’s indefatigable activity. It should be noticed that in several countries there had been artistic trends following guidelines similar to the mentality of MADI even before the movement appeared in Europe, and the quick expansion of MADI may partly be accounted for by the existence of these trends which by their latent MADI style facilitated this process. In Hungary, for instance, the extremely strong constructivist tradition – which originated in the work of Lajos Kassák dating back to the first quarter of our century -made the reception of MADI significantly easier. Albeit the Hungarian socialist regime deemed abstract art decadent, and hence barely tolerated it, this may also have contributed to the sharper definition of non-figurative trends, as each abstract piece of art was at the same time a forceful statement in this milieu.

It is interesting that in the nineties several Hungarian artists discovered how closely the style which they had used before related to the mentality of MADI. No wonder that the first Hungarian MADI exhibitions displayed some works from the sixties and seventies, and a number of artists participated in them who had previously been active in the style of neoconstructivism characteristic of Hungarian art in the second part of the twentieth century – among others Imre Bak, Tibor Csiky, János Fajó, Tamás Konok and Dóra Maurer. The Hungarian appearance of the movement in 1991 was followed by a series of grandious events, the most significant of which was probably the International MADI Festival held in Győr, in July 1995. Even Carmelo Arden Quin took part in this event. The festival was not only a forum for the creative artists of the MADI movement, but it reflected the whole attitude peculiar to the trend. Besides the creative arts it also included music, poetry, and most importantly, it revealed the social nature of MADI – the festival well-nigh “demanded” that the visitors and spectators participate in the various events, in other words it attempted to attract the “average” person to creative activity. The relationship of the Hungarian MADI movement and international MADI was meant to be corroborated by a double exhibition held in Budapest in 1997. The visitors could view the pieces representing the trend at two different venues. 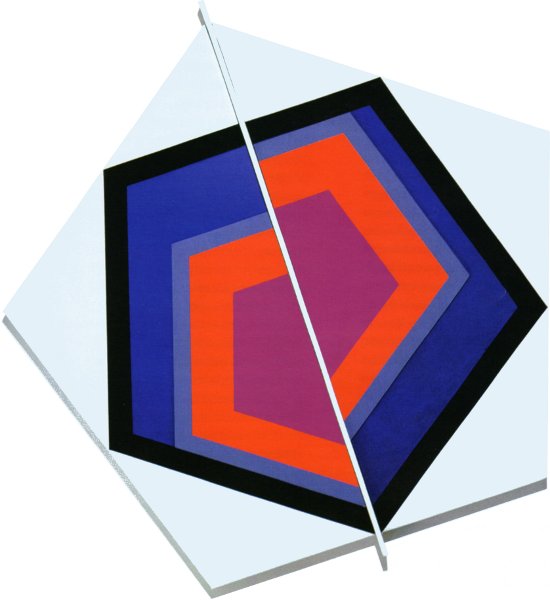 In Italy, the style of Futurism, which crystallised in the early years of our century, can be mentioned as one predecessor of MADI. On the one hand, Futurism can be linked to MADI on the basis of their radical social and political message, and on the other, because both trends have emphasised the importance of movement. Although Futurist painting approaches movement somewhat differently, one must not overlook the fact that in sculpture attempts at the elaboration of real movement were present already at this stage. Another important factor is that in Italy, abstract art could develop fairly freely after the end of World War II. In 1946, Lucio Fontana launched the so-called “espacialismo” in Milan; in 1948, the Movimiento Arte Concrete was formed under the leadership of Dorfles, Munari, Monnet and Soldati. The first independent MADI exhibition took place in 1955, at the Numero gallery in Florence in the middle of this transitional period. After this display in 1955, a series of art groups advocating geometric abstraction came into being: “Motus” (Florence), “Groups de Recherche D’Art Visuel” (in which Le Pare and Garcia Rossi took part], “T” (Milan, 1960 – this group undertook research into kinetic art), “N” (Padova), “M. I. D.” and “63 Group” (both in Rome). Despite the fact that the official Italian MADI Group was not formed until 1984, some members of the aforementioned groups later joined MADI. Salvador Presta, who had often stayed in Argentina before – and hence followed Gyula Kosice rather than Arden Quin -, returned to Italy in 1965, and in 1984 he founded the Italian MADI Group in Genova. One of the main functions of MADI in Italy was the confirmation of abstract art as opposed to figurative painting and sculpture. This may partly explain why Italian MADI attributes primary importance to ingenuity, wit and imagination, contrary to the French MADI movement, for example, which puts rational, clear and perspicuous organisation in the first place (this, of course, does not mean that French MADI would forsake invention, one of the indispensable elements of the trend). It is no exaggeration to claim that the movement has played a crucial role in the process as a result of which non-figurative art has become dominant in the cultural life of Italy. 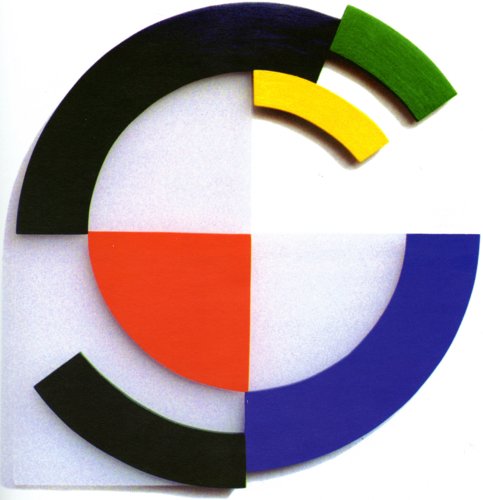 In Spain, the situation is rather different. In this country, geometric abstraction, to say the least, is not too popular, which manifests itself also in the condition of Spanish MADI. As opposed to Hungary, France and Italy, no independent MADI Group exists in Spain, it is far more appropriate to speak about artists working isolated, on their own, whose only common feature is the fact that they are closely related to the mentality of MADI. Nevertheless, this situation is bound to change in the – perhaps not too far – future, since Volf Roitman settled in Barcelona in 1987, and through his writings and exhibitions he is spreading the ideology of MADI in Spain too. Consequently, we may no longer say that MADI is completely unknown in this country.

The process mentioned in the previous paragraph illustrates the means by which MADI is in constant expansion. As the movement came to Europe from Latin America fifty years ago, it is now penetrating and ever increasing number of European countries. No setback has affected the dynamism with which MADI has been conquering and recapturing new territories for the ideas of geometric abstraction. This phenomenon best illustrates the dynamism of MADI – that movement which unifies abstraction, dimensionality and invention. 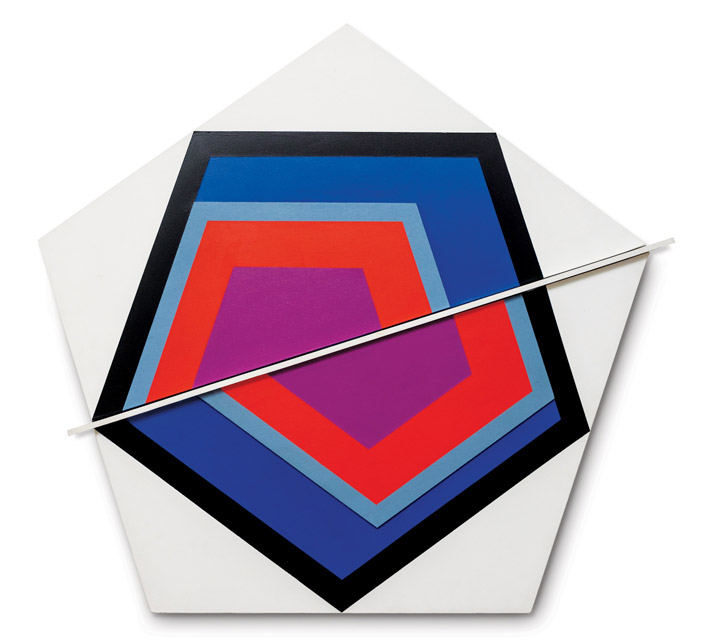